Discuss and put all articles relating to Milan's transfer dealing for this summer. 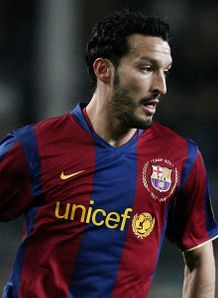 Milan are being priced out of the running to sign World Cup-winning Italian full-back Gianluca Zambrotta from Barcelona, according to reports in Italy.

The Rossoneri are keen to bring the 31-year-old former Juventus full-back back to Serie A following a two-year spell in La Liga.

However, while Zambrotta is keen on joining Milan, an Italian football association spokesman claims the parties are just two million euros (£1.5million) from striking a deal.

"The difference is two million euros. The player hopes to come to Milan and the Barcelona management is aware of it," said a spokesman from an Italian football association.

"But Barca is an extremely expensive 'boutique'. They have no sooner opened the bidding than they are up 30, 40, or 50 million - figures that are not compatible with any budget."

AC Milan announced late on Saturday night that they had completed the signing of Italy full-back Gianluca Zambrotta from FC Barcelona, although no fee or length of contract were disclosed.

Two seasons
The 31-year-old returns to Serie A after two seasons in Spain in which he scored three goals in 58 top-flight appearances. Zambrotta, who can operate on either flank, joined Barcelona in 2006 following the demotion of former club Juventus for their part in Italy's sporting fraud scandal. He had played 217 league matches for the Bianconeri.

Dutch test
He never hid his desire to move back to Italy one day, but arrives at Milan after Carlo Ancelotti's side finished fifth in Serie A and failed to qualify for next season's UEFA Champions League. Capped 71 times by his country, Zambrotta looks certain to start the Azzurri's opening UEFA EURO 2008 game against the Netherlands in Berne on 9 June.