Arguably the most popular manager in the world, Sir Alex Ferguson has had a very successful campaign at Manchester United.

The question is, who will come after Fergie? How much longer will he be with us? Will anyone ever be able to replace this wonderful manager?

I hope he doesn't leave any time soon...

SkySports wrote:
Fergie to quit within 3 years
United boss reveals plans to quit before he turns 70 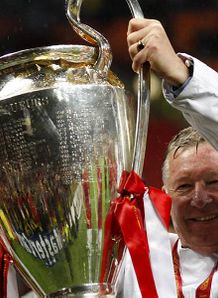 Sir Alex Ferguson has revealed his intention to step down as Manchester United manager within the next three years.

Ferguson continued his outstanding record at Old Trafford by securing a memorable Premier League and UEFA Champions League double in the 2007/08 campaign.

The Scot had previously announced plans to retire at the end of the 2001/02 season; however he made a dramatic U-turn in February 2002, agreeing to stay on at the club.

But Ferguson, 66, has now revealed his intention to quit his managerial role at United before he turns 70-years-old.

"I won't be managing here any more than three years at the very, very, very most - no question.

"I think she deserves a bit of my time. The older you get, the more guilty you feel about it. What I would like to do in life is travel to places I have never been to.

"I would love to go to the States and spend about three or four months there. I will still be involved with United in some shape or form. I hope so because I have a good relationship.

"There is no chance of me ever being sacked. I think it will be my decision and [chief executive] David Gill is happy with that."

United aren't gonna be the same without him

Eric Cantona admits he would 'love' the opportunity to manage Manchester United in a few years' time.


The Frenchman established himself as a United legend during four-and-a-half years at Old Trafford in the 1990s.

He won four Premier League titles during his time with the Red Devils and was the catalyst behind the club's domestic domination.

Cantona retired in 1997 and has since taken up acting, but concedes he would enjoy the chance to replace Sir Alex Ferguson as United boss.

"Today I do exciting things and I am proving many things," Cantona told Sky Sports News.

"Today I can enjoy it even more, but maybe in the future, in a few years' time when Ferguson retires, yeah, why not? I'd love to."

When asked if there were any other clubs he would be willing to manage, Cantona replied: "No, Manchester United...or the England national team."

Cantona was one of the first overseas players to make a major impact in the Premier League, but is concerned about the current foreign influence in the English game.

He added: "I think it's important to have a minimum of English or British players in the squad and to still work on the young players.

"For the national team, it's very bad.

"To have the best chance to win things, you must have as much as possible with English players to have a big choice and work hard on young players."

Legend. Now that was a player who bled Red.

Would be and awesome manager like. I bet he wouldn't hide his emotions aswell

He should manage a team in the lower leagues then move on to bigger things if he really want's to manage United some day.
_________________
Forca Portugal!