i thought he'd gone to Utd!

i guess he would rather be in North London with Bale and Gunter, fair play.. chose the wrong side of north london though

Man Giggsy is his idol, how is he going to play a legend like that!

Believe you've been linked with our Artur Boruc?
Gutted like.

I guess Fergie was too busy tanning it up in France to really care at this point haha. Wenger must have lured him... lol

i guess he would rather be in North London with Bale and Gunter, fair play.. chose the wrong side of north london though

Nooby said it, Giggs is his hero.. im guessing that that micky mouse cup you lot want didn't attract him very much

Bel wrote:I guess Fergie was too busy tanning it up in France to really care at this point haha. Wenger must have lured him... lol

this kid would be a good signing but if we sign him i think he will go out on loan somewhere.

Nope. That was the reason why he chose Arsenal, probably. Because Wenger probably promised him a first team chance.. whereas I think we were gonna loan him, and I guess he didn't want that.

Good luck to him.

Arséne Wenger confirmed on Arabic news channel Al Jazeera that the transfer of Olympique Marseille attacking midfield star Samir Nasri to Arsenal will be completed after the European Championships.

Gunners boss Wenger confirmed the transfer when asked if Nasri would be coming after Euro 2008 by his co-commentator during the Romania v France game.

The reports come from respected Arabic Arsenal forum Arsenal 4 Arab that 58-year-old Wenger stated on Al Jazeera News that Nasri has signed but it will not be officially announced until after Euro 2008.

It appeared that several posters on the forum had viewed the France game and heard Wenger confirmed Nasris arrival, most of the fans, applauding the coul.

News of the 21-year-olds move escalated earlier today when French agent Issa Traore told Christian Recalcatis website that the France prodidgy will joing the Gunners after this summers Championships:

Samir will go to Arsenal. Arsene Wenger is a great coach and as usual has proved clever in being able to sign the boy before his price rose further.

Hes a great player that Italian teams have allowed to escape.

Looks like he is now signed pretty much, very good signing in my opinion. £11 million im guessing.. David Villa and Zapata and that will be a quality summer for us!

Well reports were £11.5, skysports.. newsnow all reported that amount anyway, im just glad Wenger got some money out and spent it! Very good deal.

f**k.. nasri is going to do well for arsenal

They spent 11 mil on him. Good bit a business that. I can't see Arsene splashing the cash on any more expensive players. Not his style. He likes his kids

called it. Thats a great signing for us.

very good signing but f**k whats with all the french lol. still nasri should be good in midfield with fabregas.

Sagna ,25, who joined Arsenal from French side Auxerre last summer, impressed greatly in his first season with Club, making a total of 40 appearances, before his season was unfortunately cut short as a result of an ankle injury.

Bacarys great performances last season did not go unnoticed as he was voted into the PFA Team of the Year by his fellow professionals.

Everyone at the Club is looking forward to Bacarys continued contribution in the forthcoming years.


when healthly he is a beast....good to seal him up 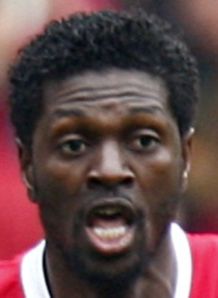 Milan have contacted Arsenal about a move for Emmanuel Adebayor and the player would be open to the move, according to his agent.

The Serie A giants have declared interest in the Togo striker on many occasions in recent months, but the player has repeatedly insisted he will be at Arsenal next season.

However, his agent, Stephane Courbis, was quoted in an Italian newspaper revealing that, should Arsenal accept a bid, the player would be interested in joining Milan.

"The player is fine at Arsenal, but when Milan come in for you it's difficult to tell them no," Courbis told Corriere dello Sport.

"I know that Milan have contacted Arsenal and now everything depends on what Arsenal want to do.

"I'm not an Arsenal director and so I can't say if the club have changed their mind about the player and (if so) why.

"I know that Milan is one of the biggest clubs in the world and, when they want to take you, you have to really consider it. It's difficult to say no to Milan."

According to Milan vice-president Adriano Galliani, the club has been given permission to talk to Chelsea star Didier Drogba and, amid reports his club are keen to offload the striker, it had been expected that that they would make the Ivory Coast star their main addition up front.

However, Courbis believes Milan would prefer Adebayor to Drogba as they want to inject some youth into their ageing squad.

"With Adebayor, Pato and Kaka, who in the world would do better?

"It's true that Milan have quite an old squad, but this is why they signed Flamini and that's also why they want to sign Adebayor, who is 24 years old, whereas Drogba is 30.

"This is what Milan wants."

Thats what im on about man.

Highly-rated Le Mans striker Gervinho has claimed that Arsenal are pursuing his services.

Gervinho joined Le Mans last year from Beveren - a club that had a co-operation agreement with Arsenal from 2001 to 2006.

The Ivory Coast international has impressed since his switch, and has stated that The Gunners have held discussions with his agent.

"When I arrived at Le Mans nobody knew me," Gervinho exclusively told skysports.com. "I had to work hard to get into the first-team.

"Today I am a bit known in Europe. Arsenal have spoken to my agents and they are looking at it.

"Arsenal are a big team, they have made it clear they want me. However, [Le Mans president] Henri Legarda is saying no to them.

"My club is refusing any discussion with Arsenal because they do not want me to go. My contract runs out in 2010 and they are keen to extend my deal."

Gervinho is flattered by the reported interest being shown in him, but plans to honour his contract at Stade Leon-Bollee.

"I know Wenger likes signing young players. I prefer to stay in Le Mans and learn my trade at the club that gave me a chance to be linked with a big club," the 21-year-old explained.

"I owe them more years. I will try to win silverware with them. It won't be easy but it is possible, so I will stay with Le Mans."

Adebayor wont go unless Wenger lets him which he has already said he wont!

He's important for us and unless Milan offer £32 million like reports are saying don't see him going.

man i hope your right but he did let unreal go....that was the saddest day of my football life.

Arsene Wenger wrote:man i hope your right but he did let unreal go....that was the saddest day of my football life.

You talking about Thierry?

Arsenal is delighted to announce that Wales Under-21 international Aaron Ramsey has today signed for the Gunners from Championship side Cardiff City on a long-term contract for an undisclosed fee.

Although still only 17, Aaron has already represented his country at Under-21 level and became the youngest player ever to represent Wales at this level in August 2007, in a 4-3 victory over Sweden Under-21s. He was also recently called up to the full Welsh squad for their friendly international matches in Iceland and Holland, but was an unused substitute on both occasions.

Young midfielder Ramsey progressed through the youth ranks at Cardiff City and also became the youngest ever player to represent the Bluebirds, coming on as a substitute in the League match against Hull City on April 28, 2007, at just 16 years 124 days, breaking the previous record set by John Toshack.

Since making his debut for Cardiff City in the 2006/07 season, Ramsey went on to make a total of 22 appearances for the Welsh side, including a substitute appearance in last seasons FA Cup Final against Portsmouth at Wembley Stadium.

Ramsey, born in Caerphilly on Boxing Day 1990, has already had a good experience of Emirates Stadium. Aaron actually scored Cardiff Citys first goal in the FA Youth Cup Quarter-Final in 2007, in a match which was watched by 11,610 supporters, with Arsenal eventually coming out 3-2 winners.

Manager Arsène Wenger said: Were delighted to have signed Aaron Ramsey. He is a young player who has shown huge potential with his performances for both Cardiff City and Wales at under-17 and Under-21 levels. He is still only 17, but has already shown that he is a very intelligent and mature player with great quality. Although he mainly plays in midfield, Aaron is a versatile player and can also play across the defence. We are all looking forward to welcoming Aaron to the Club for our pre-season preparations.

Aaron Ramsey said: Im so happy to have signed for Arsenal. I am joining one of the biggest clubs in the world and cant wait to meet my new team mates. I recently met with Arsène Wenger and he was a big factor in my decision to join Arsenal. He talked to me for a long time about the Club and the plans for the future, which really excites me. Arsenal is a Club which always gives young players an opportunity at the highest level of the game and I am going to work my hardest to be part of future successes here.

It was a really difficult decision to leave Cardiff City, they are my local club with great supporters and I would just like thank everyone at Cardiff City for their support and help in my early career. I will still look out for their results and there will always be a place in my heart for the Bluebirds.

Aaron will join up with his new team mates at Arsenal for pre-season training in early July.

Arsenal confirms Lehmann move to Stuttgart
Arsenal can announce it has received confirmation that Jens Lehmann will be joining German Bundesliga side Stuttgart on July 1, 2008, when his contract with the Club officially expires.

Lehmann, 38, who is currently representing Germany at the European Championships, joined the Gunners from Borussia Dortmund in 2003 and went on to make a total of 199 appearances for the Club.

Arsenals departing goalkeeper is a UEFA Champions League record holder after 853 minutes without conceding a goal in the tournament as Arsène Wengers side marched to the final in Paris in 2006.

Jens was part of the Invincibles squad which completed an unbeaten Premier League title season in 2003/04 and was Arsenals hero at the 2005 FA Cup Final, saving Paul Scholes penalty in a shoot-out win over Manchester United.

Ironically, one of Lehmanns first matches for Stuttgart could be against Arsenal, when the two sides meet in at the Mercedez-Benz Arena, Stuttgart for a pre-season friendly on Wednesday 30th July.

Everyone at Arsenal would like to thank Jens for his huge contribution towards the Club and wishes him the best of luck for the future.