Jose Mourinho has told Michael Essien that he will sign for Inter on Monday according to La Gazzetta Dello Sport.

The former Chelsea coach has been linked with the club ever since current boss, Roberto Mancini, walked out on the club only to make a dramatic U-turn on his decision.

Mancini still hasn't confirmed his position with the Nerazzurri and he may leave in the summer. Meanwhile the Special One is currently free and waiting to pounce and, according to reports, he has claimed that he will sign for Inter on Monday.

Gazzetta claim Mourinho sent Chelsea midifielder Michael Essien a text message after the Moscow Champions League final telling him the news of his new adventure with the Nerazzurri.

The text reads: "Michael, you have all been great players regardless of the loss to Manchester United. On Monday I will sign for Inter and I hope that one day you too will come to Inter."

It seems as if Mourinho will take half of the Chelsea squad with him if he signs, as Inter are also interested in Frank Lampard and Didier Drogba.

Mancini has been linked with moves to Chelsea and Manchester City and if he does leave San Siro then the door would be wide open for Mourinho to walk in.

Inter are desperate to win the Champions League and Moratti would prefer someone who has experience of victory in the competition in the past to take the reins at San Siro.

If he goes to Italy, then hopefully it is Inter!
Its frusterating because Inter is dominant in Serie A, especially these past 2 years breaking records for winning streaks and all ....but they do nothing in Europe. They could make it out of group stages but they always choke right after advancing.
I really think Mourinho can turn all that around for them

Also, he'll probably give Pele a whole lot more playing time then he already has which would be awesome. That kid will definitly be in the Seleccao roster in the future!
_________________

Inter are a big side but they just need to perform much better in the Champions league, maybe with Mourinho they can do better. I still think they will need to make big signings in order to have chance of winning the CL.
_________________
Forca Portugal!

It's more than likely that he will sign for Inter. The only other bug clubs in Europe big enough for him, already have a coach.

Well, looks like Mourinho signed with Inter for 3 seasons

And i guess he told the press that in particular he wants Deco and Frank Lampard..but i can see Drogba being put on that list too, them 2 love eachother

and who knows if Maniche will stay or not either FUDAS-se lol so many chops Inter is now one of my favourite teams for sure!

Deco made up his mind a few weeks ago and said that this summer he will be leaving Barcelona for another club. So if Mourinho is at Inter i can definitly see Deco goin there
_________________ 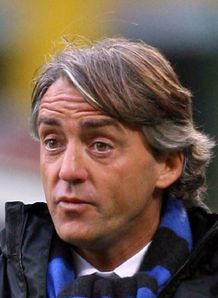 Mancini met Moratti on Tuesday, with the coach's agent subsequently claiming that the former Italy international had left the club.

The Serie A champions have still to make an official announcement on the matter and are unhappy with certain reports regarding the meeting between Mancini and Moratti.

A statement issued by the club confirmed there was no breakdown in communication between owner and coach, and Inter are also considering legal action.

"What has been written or reported...does not correspond to the facts," the statement read.

"In fact, the meeting was absolutely professional, done in a correct manner, and the coach never allowed himself to show a lack of respect towards president Massimo Moratti."

Former Chelsea boss Jose Mourinho has been tipped to replace Mancini, who is a contender to succeed Avram Grant at Stamford Bridge.