uefa.com wrote:Austria kick off with a point to prove

UEFA EURO 2008 co-hosts Austria open their Group B campaign against Croatia at the Ernst-Happel-Stadion in Vienna aiming to prove they are worthy of their place among Europe's élite.

 This is Austria's first appearance in a UEFA European Championship final tournament and their first taste of any major tournament since the FIFA World Cup in France a decade ago. Coach Josef Hickersberger will consider a positive start vital to his side's prospects but they can expect a tough test against a Croatia side who eliminated England in qualifying and ran out 4-1 winners on their last visit to this stadium in 2006.

 Croatia advanced to the finals as Group E winners, finishing with an impressive record of nine wins, two draws and just one defeat.

 Austria's best performance in the UEFA European Championship came in the inaugural edition of 1960 where they reached the quarter-finals before losing 9-4 on aggregate to France.

 Austria finished third in their group at France '98, with two draws and a defeat. Their last victory in a major tournament was a 2-1 success against United States at the 1990 World Cup.

 Croatia's best performance in the UEFA European Championship came in 1996 on their debut appearance at an international tournament. Current coach Slaven Bilić featured in the team which beat Turkey and Denmark prior to a 2-1 quarter-final defeat by Germany.

 Croatia reached the finals again in 2004 but were knocked out in the first round following draws with Switzerland and France and a defeat by England.

 The Balkan team suffered the same fate at the 2006 World Cup where they drew with Japan and Australia following an opening loss to Brazil.

 Since finishing third at the 1998 World Cup, Croatia have not got past the first round in three appearances at major tournaments. Their only win in their last nine finals matches was a 2-1 success against Italy at Korea/Japan 2002, where Milan Rapaić scored twice.

 Croatia won all three of the sides' previous meetings, starting with a 2-1 triumph in Klagenfurt in an April 2000 friendly. Mario Stanić scored the winning goal for Croatia in a match which featured current Austrian internationals Martin Stranzl and Markus Weissenberger and Croatia's Stipe Pletikosa, Niko and Robert Kovać, Rapaić and Dario imić.

 Pletikosa, Robert Kovać and imić played in Croatia's 1-0 home victory over Austria in February 2001. Mario Haas, Martin Hiden and Alex Manninger were in the Austria team.

 Croatia's third and most recent win over Austria came in Vienna on 23 May 2006 where they won 4-1 through goals from Ivan Klasnić (2), Marko Babić and Bosko Balaban. Andreas Ivanschitz scored the Austria goal.

 Croatia captain Niko Kovač is also skipper of Austrian club side FC Salzburg and his team-mates there include Austrian internationals René Aufhauser and Christoph Leitgeb. Ivanschitz was also with him at Salzburg before he moved to Panathinaikos FC where he now plays alongside Croatia's Anthony erić.

 Austria's Thomas Prager is a colleague of Danijel Pranjić of Croatia at SC Heerenveen, while Martin Harnik of Austria plays with Croatian international Ivan Klasnić at Werder Bremen.

 Srna was in the Shakhtar team that got the better of Salzburg in the UEFA Champions League third qualifying round in 2007/08.

 France in 1984 became the first and so far only team to have won the UEFA European Championship as hosts.

 This is the 13th edition of the UEFA European Championship and the eighth edition that features a final tournament with a group phase.

i will defetnly be following austria at the euro to follow linz. austria just won there warm up game 5-1 against malta with linz scoring 2.

Would you not rather see Austria do badly and Linz do badly aswell, cos if he does well then teams might get intrested and you might lose him....

no i wish linz nothing but the best. he was a good survent to us and i beleive he will stay with us even if he does score a couple of goals because there in a hard group and i can't see them progressing. plus if he leave it won't be for cheap.

yeah i beleive we have set a price of 10 mil although i wouldn't be surprised if we accepted something like 8. but he has said lately he wants to stay at braga but i guess that would change if a bigger club came offering.

Only time will tell. He seems like a humble guy, obviously i wouldn't know personally but there aren't stories in paper's talking abouot his future and him leaving and such, so he seems like quite a loyal lad.
_________________
Forca Portugal!

yeah read an article the other day saying he has a contract with us and intends on staying. but how many times have players said that just to leave lol. 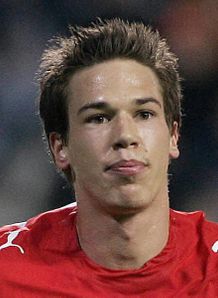 The likes of West Ham, Middlesbrough, Newcastle and Fulham have all scouted him in recent months and are now set to step up their interest.

They will all be playing close attention to his displays at Euro 2008 - where he will lead the line for co-hosts Austria.

Up to five clubs were in attendance to see Linz smash home two goals in Austria's warm-up against Malta last week and he could now be nearing a dream move to England.

The Sporting Braga star has been in fine form this season in Portugal and will be looking to expand his growing reputation as he spearheads the host nation's attack this summer.

Linz, 26, scored 11 league goals for Sporting and is now hoping to impress in the coming weeks.

A spokesman for agency FN Sports, told skysports.com: "There has been interest in Roland from the Premiership and a number of clubs were watching him again at the Malta game.

"But he is focused on the Euros at the moment and we will see what happens after the tournament."

Just as we were talking about him this comes out the next day...

well if he does leave braga it better be to newcastle. will be sad to see him go but we should get good money for him which may go towards matias.

i hope Austria dont get embarassed. They've been dubbed the weakest side of the tournament.
Hopefully they can put up a good fight against Croatia
_________________

The only player i know is Linz, although I when it comes to match day im sure i will recognize a few other's. Croatia are gonna be so confident coming into this game and to be fair they do have a strong team.
_________________
Forca Portugal!

Croatia just defeated Austria. 1-0. which was a pk golo

it was a pretty entertaining game. I was supporting Austria in this game..they really put up a big fight, IMO they should've taking this game. they just didnt take the chances they had
_________________

Austria were unlucky not to go away with a draw atleast. They dominated the 2nd half but just couldn't put any of there chances away.
_________________
Forca Portugal!

did linz play. the game was on at 2am here and since i havent slept since the previous night i deceided to miss it.