Guys, keep to Ronaldo in this thread please and thank you

I don't think he will go, I can't stress this enough. I am anxious regarding his press conference though, there must be a reason why he wants one... I don't think he'll announce his departure, it would be so stupid in so many ways. I wonder, what will happen?

He needs to stay.

Bel wrote:Guys, keep to Ronaldo in this thread please and thank you

I don't think he will go, I can't stress this enough. I am anxious regarding his press conference though, there must be a reason why he wants one... I don't think he'll announce his departure, it would be so stupid in so many ways. I wonder, what will happen?

He needs to stay.

I hope he walks into the press conference with a UNited shirt, and tells Real Madrid to f**k off!

David Beckham has declared that Cristiano Ronaldo should stay at Manchester United rather than pursue his supposed dream move to Real Madrid - but, even as the Spanish club acknowledge that it may be impossible to sign him this summer, details have emerged of the sums that they are prepared to offer to prise him from Old Trafford.

Sources in Madrid claimed last night that Ronaldo, who earns £120,000 a week at Old Trafford, would be offered a contract worth almost £150,000 a week after tax to join Real. That would make him the best-paid player in world football by some distance, with Real having also indicated that they are prepared to shatter the world transfer record and offer United a fee in the region of £75million to get their man. Real officials have also claimed that discussions over Ronaldo - presumably with his representatives or another third party - have been taking place for the past 12 months, another claim that will infuriate United.

United maintain that there will be no deal, regardless of Real's and even Ronaldo's feelings on the matter, but there is concern at Old Trafford that his head may have been turned by Real's interest. In theory, they may be willing to offer him a new contract if that is what it takes to keep him in Manchester, but, so far, there have been no such negotiations with him or his agent, Jorge Mendes, which is why United are alarmed by Ronaldo's repeated claim that he is about to make an announcement on his future.

Beckham, who preceded Ronaldo in the United No7 shirt before enduring four, largely difficult, years at Real, entered the debate yesterday, suggesting that the 23-year-old should stay at Old Trafford. It's none of my business, but I believe he's at the right club and a club he should stay at because, as much as Real Madrid are a great team and one of the biggest clubs in the world, he's only just starting at Man United, Beckham said. He has only been there a few years. He has a lot of people around him who will protect him. As a fan of Man United, I hope he stays there, but who knows?
Related Links

Ramón Calderón, the Real president, appears to have backed off slightly since David Gill, the United chief executive, wrote to him last week urging him to drop his bid, but even yesterday, in acknowledging that it may be impossible to agree a deal for Ronaldo, he made clear the depth of his and his club's commitment to signing the Portugal forward.

At the moment, it seems impossible for him to come, Calderón said. We have to think that, whatever Cristiano says, Manchester won't want to sell him. We don't know if Ronaldo wants to leave or not. That seems to me to be getting ahead of events.

Real are prepared to sell players such as Mahamadou Diarra, a former United target, and Robinho, the 24-year-old Brazil forward, to accommodate Ronaldo. Robinho even claimed that he is aware of proposals from Chelsea and United - the latter a supposed swap deal involving Ronaldo - but neither Gill nor Sir Alex Ferguson would entertain such a plan. United are far more interested in adding to their squad, but their hopes of signing Karim Benzema, the Lyons forward, remain distant. Luis Fabiano, of Seville, remains a more feasible alternative, but that deal may hinge on the outcome of a dispute over his contract.

He's f**cking amazing to watch and one of my favorite players, i love the way he plays and admire his confidence for what has happened to him after the world cup and his dad passing away and all. His expressions after scoring goals, arrogance everything about him makes the player he is! Don't want him to leave the prem at all.

He causes a major threat to Arsenal winning the trophy, always s**t myself when i see him run at our defence because you know here f**k you up.. considering he has a pretty good goalscoring record again us to doesn't really help!

Yeah I can see your conflict.

To be honest, I would love to have him around, he's my favourite player after all. But if he doesn't feel any loyalty to this club then there's no point in keeping him. What realy saddens me though is that I truly believe that leaving us now would f**k his career up for good. So it's really hard, because as a United fan I want him to stay to help the team but at the same time I want only loyal players to stay, but as a Portuguese Ronaldo fan, I want him to prosper at United... it's tough 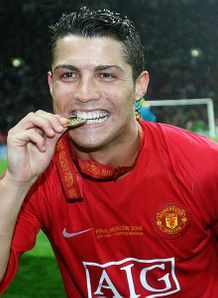 Manchester United have lodged an official complaint with Fifa over Real Madrid's pursuit of Cristiano Ronaldo.

United had previously warned that they would consider reporting the Spanish giants to world football's governing body unless they ended their public campaign to take the winger to the Bernabeu.

But with the level of speculation surrounding the Portugal international's future having intensified since then, with the player himself doing little to reduce the media frenzy, United have made their complaint official.

A statement on the club's official website read: "On 27th May, Manchester United made clear its intention to report Real Madrid to FIFA if it continued to involve itself in the future of Cristiano Ronaldo.

"Unfortunately, Real Madrid has not kept its own counsel and the club feels it has no alternative but to make a formal complaint to the world governing body, which it has done today.

A Fifa spokesman said: "I can confirm that we have received an official request from Manchester United to look into the matter.

"We have only just received the documents so we need some time to analyse them before we can make any decision."