bentley wow. man spurs have a very good shortlist. if they actully bring in some of these players then what a big yr it is gonna be for them.

Giovani signed with Tottenham a few days ago 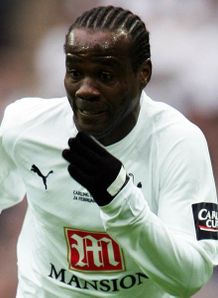 Tottenham Hotspur's Pascal Chimbonda has questioned the police investigation into alleged football corruption after the player was released from bail earlier this week.

Spurs defender Chimbonda was released from bail on Friday by officers investigating allegations of football corruption.

Chimbonda had been arrested last September by officers from the City of London Police on suspicion of conspiracy to defraud.

The arrest surrounded a £18,000 loan given to Chimbonda by the player's agent Willie McKay with the agent defending his decision to give the player the loan.

The 29-year-old has now been cleared of any wrongdoing and the French international is unhappy that the whole matter has painted him in a bad light.

Chimbonda also believes the incident affected his position at Tottenham with the club bringing in Alan Hutton during the January transfer window.

"I am happy that I have been cleared of any wrongdoing and I always knew I would be," Chimbonda told skysports.com.

"When I was arrested I was amazed by all the media coverage with the news on the television and on the front and back pages of the papers.

Tears
"My family were in tears when I was arrested and I found it very difficult to explain to them what was happening when I had done nothing wrong in the first place.

"I did not know what was going on and it affected my position at Tottenham.

"When I was released from bail this week there was no coverage in the press.

Chimbonda faces an uncertain future at Tottenham this summer and the player feels his arrest has affected his long-term position.

"The investigated affected me as I was forced to spend two days in the cells for nothing," the Frenchman explained.

"I love England and playing in the Premier Legaue, but I find the policing in England very strange."

Dos Santos for me is very overated!

Always thought Bojan has been better than him tbh but you have a very good signing in Modric who i have always rated, such a talented player and id loved him to sign for Arsenal.. some stupid reason though Wenger never put in a good enough offer! Him and Eduardo would of been a good link up aswell.