Anything and everything to do with the England National Team goes in here.

SkySports wrote:
Capello demands dedication
England manager plans to 'change the mentality' of his side 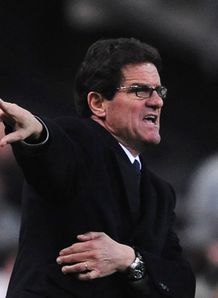 England manager Fabio Capello has demanded 'courage and strength' from his players in their forthcoming friendlies as he looks to 'change the mentality' of the side.

Capello's men go head-to-head with the United States at Wembley on Wednesday before taking on Trinidad and Tobago the following Sunday at the Hasely Crawford Stadium.

And after witnessing the all-English UEFA Champions League final between Manchester United and Chelsea, the Italian has revealed his determination to recapture the spirit and hunger supporters witness England players produce on a regular basis at club level.

"When you play for the national team you have to play like it is a final in every game," he said. "Against USA I want to see one team playing like a group, with courage, and strength.

"It is very important for me to recover the spirit of the England team. We have 28 players and before we leave for Trinidad, I will choose 20 or 21 players.

"Everyone has to come when I select them and these players have to play with the spirit like they do at their clubs.

"My ambition is to arrive at the top. You have to work to change the mentality. I believe we can do that but the players must also believe.

"England had two teams in the Champions League final and they are ambitious teams. You have to transmit the same ambitions in the England team.

"When a player puts on the England shirt you have to play with a certain kind of spirit and that is very important.

"I will play the first 11 who I think are the best players at the moment. It is also very important for the other players.

"I will experiment against Trinidad. We have good material here and have been competitive against every team."

He added: "Yes. Why not? He said I have been with Roma, Juventus, Milan, Real Madrid and always wanted to go to the very top. I don't understand why people feel differently. We need to be ambitious." 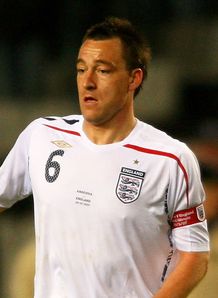 John Terry has been named as England captain for Wednesday's international friendly against the USA.

The Chelsea defender had been captain under former England boss Steve McClaren but this is the first time he will lead his country under Fabio Capello.

Capello has decided to rotate the captaincy around before naming a permanent skipper for the World Cup qualifiers with Steven Gerrard and Rio Ferdinand both having the captain's armband in his first two games in charge.

Terry's appointment as captain will come as a massive boost to the player as he tries to recover from the heartbreak of missing his penalty in the UEFA Champions League shoot-out defeat to Manchester United last week.

And Capello has confirmed that he hopes the role will serve as a positive distraction after last Wednesday's disappointment in Moscow.

The Italian said on Sky Sports News: "I made the decision before the UEFA Champions League final. I think it is a good decision for John Terry after last Wednesday.

Capello went on to confirm that Terry's Chelsea team-mate Frank Lampard, who has yet to play under the Italian due to injury, will feature against the United States.

"It is important for the Chelsea players to play for us so they can forget the game in Moscow. They will all play some part.

"Yes [Lampard will have a role]. I know him from his performances at Chelsea. I look forward to seeing him in midfield. I hope he performs well tomorrow."

On David Beckham's long-term future at international level, he added: "I saw David in training and he worked very well. He is very fresh at the moment because the MLS season has just started.

"He is very fit, but it is impossible to predict the future."

Three and easy for England
Defoe and Barry on target 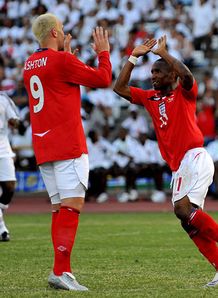 England cruised to a 3-0 win over Trinidad and Tobago, with Jermain Defoe scoring twice and Gareth Barry also finding the net in Port of Spain.

Coach Fabio Capello named his strongest side and they were in control from the off with Barry volleying home after just 12 minutes.

Moments later it was two as Defoe poked the ball home and he doubled his tally just minutes into the second-half to wrap up the win.

Capello made a host of changes after the break with Joe Hart, Phil Jagielka and Stephen Warnock all joining Dean Ashton - who started the match - in making their England debuts.

As many predicted Capello started with his most experienced players with the exception of Ashton up-front - who partnered Defoe.

The opening exchanges saw England dominate possession and they almost went ahead on six minutes when Defoe was just inches away from connecting with a David Beckham cross and heading the visitors in-front.

England looked particularly dangerous down the left with Wayne Bridge and Stewart Downing seeing plenty of the ball and it was that combination that opened up Trinidad and Tobago.

A nice exchange of passes saw Downing collect on the left, he then chipped a sublime ball into the box for Bridge to race onto and he crossed for Barry to volley home from close-range.

Just minutes later and it was two, as Defoe fired home. Again Downing was involved as he played a defence splitting ball through for the Portsmouth striker - who broke the offside trap - and toe-poked the ball past the helpless Clayton Ince.

By this time, the home side had also seen leading striker Kenwyne Jones stretched off with suspected knee-ligament damage and they rarely threatened without the Sunderland striker.

Defoe, Ashton and Downing all had decent chances before the break - but none could seriously test Ince the home side began to defend in increasing numbers.

The second period began in much the same manner as the first with Defoe grabbing his second.

Hart, Jagielka, Peter Crouch and David Bentley had all been brought on at the break and the latter two combined to create the chance for Defoe.

Bentley got down the right and crossed for Crouch - the ball dropped and came for Defoe to side foot home with ease from eight yards.

Defoe will have been pleased with his two goals but he should have claimed his hat-tick before the hour when Steven Gerrard dummied a Crouch pass to set him clear in the box - but he could only poke his shot wide with only Ince to beat.

Ashley Young and Theo Walcott were soon introduced to the action and both had their chances to make an impact.

Young tested Ince with a nice effort from the edge of the box but Walcott should have opened his senior account when he capitalised on a Denis Lawrence mistake to break clear but he could not beat the veteran T&T keeper - who also got up to deny Crouch from the rebound.

The final chance of the evening fell for the home side when captain Aurtis Whitley fired over from just inside the box.

I love how we keep the ball more now, but we still give it away cheaply, and that will have to be sorted out. Not a bad performance, from a make shift side, in the heat, tired from a long hard season, and a shockingly bad pitch.
_________________

The pitch was apparently quite hard, although it didnt look too cut up. 1st half was a good performance, keeping the ball, moving well. 2nd half was a very different story, some player's that came on just seemed to make silly passes and give away the ball.

Defoe shouldn't be playing for England unless he can sort that finishing of his out. He needs too many chances to score a goal simple as, I like him and think he could be a could player although he needs to work on his first touch and finish. In this game he had 4-5 clear chances, he needs to be more clinical infront of goal, because against the bigger side he is gnna have trouble trying to get as many chances as he did today.

Gareth Barry is simply class!
Him and Gerrard are a big influence in the game unlike Lampard, they both link up well, movement off and on the ball is good, they are just perfect together. It's what England have been waiting for, someone to work well with Gerrard.

Bentley, this kid has got talent but he needs to be more consistent with his crosses. At times his crossing is amazing and pin point accurate but otehr times they just head off in there own direction. I'm sure he will be a great replacement for Beckham, but at the moment i would stick with Becks.
_________________
Forca Portugal!