Club Atlético de Madrid (often mispelled Athletico Madrid) is a Spanish football club based in Madrid who play in the Primera División of La Liga. Their home stadium is the Vicente Calderón Stadium, which currently holds up to 55,000 spectators. The club is one of the most successful in Spanish League history, having won both La Liga and the Copa del Rey on nine occasions, including a double in 1996. They also won the European Cup Winners Cup in 1962 and were European Cup runners-up and Intercontinental Cup winners in 1974. Atlético play in red and white striped shirts and blue shorts.

During their history, the club have been known by a number of nicknames including los colchoneros or the mattresses due to their first team stripes being the same colours as old-fashioned mattresses. During the 1970s they became known as los indios. This was allegedly due to the club signing several South American players after the restrictions on signing foreign players was lifted. However there are a number of counter theories which claim they were so named because their stadium is camped on the river bank or because los indios were the traditional enemy of los blancos the whites. The latter nickname refers to the club's city rival Real Madrid.

The club was originally founded on 26 April 1903 as Athletic Club de Madrid by three Basque students living in Madrid. The founders saw the new club as a branch of Athletic Bilbao. In 1904 they were joined by dissident members of Madrid FC. They began playing in blue and white, as did Athletic Bilbao, but by 1911 they were playing in their current colours. The reason the club changed colours is not known for certain. However one theory is that red and white striped tops were the cheapest stripes to make because the same combination was used to make bed mattresses. The left over cloth was easily converted into football shirts. Although both Athletic Bilbao and Athletic Madrid started out with blue and white stripes, the discovery of a cheaper option probably persuaded them to change. The Madrid club did it first and they became known as los colchonerosthe mattress makers. Other more plausible account of the reason to change colours is that both Athletic Bilbao and Athletic Madrid used to buy Blackburn Rovers F.C. blue and white kits in England. Once in 1911 Juanito Elorduy, former player and member of the board of Athletic Madrid, went to England to buy kits for both teams. He did not find Blackburn Rovers F.C. kits and bought Southampton F.C. red and white ones instead. Athletic Bilbao adopted Southampton F.C. full kit with red and white shirt and black shorts, whereas Athletic Madrid adopted the red and white shirt but kept Blackburn Rovers F.C. blue shorts.

First Atletico's ground, 'Ronda de Vallecas', was situated in the homonym working-class area south of the city. In 1919, the Compañía Urbanizadora Metropolitanathe company that ran the underground communication system in Madridacquired some land, near the Ciudad Universitaria. As part of that project the company built a sports stadium, named Estadio Metropolitano de Madrid. With a capacity for 35.800 spectators, in 1923 it was rented by Atlético de Madrid, which used it until 1966 when they moved to the new Estadio Vicente Calderón. After the move, the Metropolitano was demolished, being replaced with university buildings.

In 1921 Athletic Madrid became independent of Athletic Bilbao and by 1923, the club built its first stadium, the Metropolitano. During the 1920s Athletic won the Campeonato del Centro three times and in 1921 and 1926 they were Copa del Rey runners-up. Based on this record, they were invited to join the Primera División of the inaugural La Liga in 1928. During their debut La Liga season the club were managed by Fred Pentland. However in 1930 they were relegated to the Segunda División. They briefly returned to the Primera División in 1934, again with Pentland in charge. The club were relegated again in 1936 after Josep Samitier took over in mid-season from Pentland. However the Spanish Civil War gave the club a reprieve and both La Liga and Athletic's relegation were postponed. 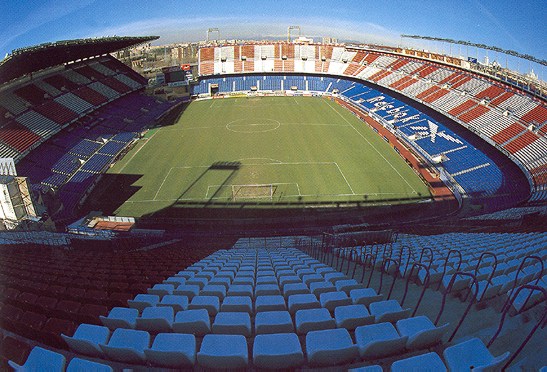 Atlético could be moving away from the Vicente Calderón to a renovated stadium, La Peineta, in 2012.