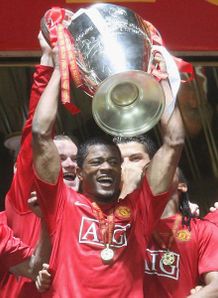 Patrice Evra has revealed that he will have another meeting over a new Manchester United deal next week.

The Frenchman has just one year left to run on his current contract and he admits there is a lot of interest in him after an impressive season.

He has been waiting for his future to be sorted out for some time and is now set to discuss an extension with club officials.

"The negotiations have lasted a little. We will have a new meeting on May 29," Evra said in L'Equipe.

"Now it is up to the club, who know what we have already agreed. We will see.

"A lot of clubs are attracted to me. It is quite logical as I did a lot on the pitch.

"Anyway, I hope we will find a solution as soon as possible."

Evra was a key figure for United this season as they won the Premier League and the UEFA Champions League, and he is now hoping for more success with France at Euro 2008.

The left-back has been included in Raymond Domenech's initial squad and is looking to feature heavily in Austria and Switzerland.

He said: "Euro can be a very important step in my career. It will be my first tournament with the French team.

"I am confident, and at the group's disposal. I hope I can finish the season as European champion with Les Bleus."

The French international joined the Red Devils in January 2006 from French giants Monaco and has proven to be an astute piece of business for Sir Alex Ferguson.

A reported £5.5million transfer fee now looks a snip for a player who has settled into Premier League life.

His current deal at Old Trafford was due to run for another year, but with the club keen to avoid a potentially hazardous situation which could see him move elsewhere they have now tied him down until 2012.

Ferguson is delighted to have seen the full-back put pen to paper, and expects him to progress even further in the future.

"Patrice has been a key part of the Club's success in the last two seasons," the United boss told the club's official website.

"He's developed into one of the best full-backs in world football and his infectious personality has helped build the incredible team spirit that exists at Old Trafford."

Evra, who is currently on Euro 2008 duty with France, also expressed his pleasure at being given the opportunity to prolong his time in England.

"It's a pleasure and an honour to be part of this fantastic side and to be coached by Sir Alex Ferguson and his staff," he said.

"United is more than a club - it's a family I am proud to be a part of and that's why it's always been a first choice for me.

"I declared when I arrived that I was coming here not just to play but to win, and United is the ideal place to realise such a dream.

"It's a privilege to play in front of our fantastic fans and I'm sure the success we've earned in the last two seasons confirms the history of this club and will be the start of something even more special."