Sport Lisboa e Benfica (commonly referred to as simply SL Benfica, Benfica or Benfica Lisbon) is a football club based in Lisbon, Portugal. Benfica was founded in 1904 as Sport Lisboa, but underwent a name change in 1908 after merging with Sport Club de Benfica.

Benfica was one of Europe's first powerhouses, and was the first team to break Real Madrid's dominance in the early European Champions Cup. Having won two European Cups in a row (1961 and 1962), the Lisbon club never managed to win a European trophy again, despite losing several ECC finals to AC Milan (1962 and 1989), Internazionale (1964), Manchester United (1967) and PSV (1988), plus a UEFA Cup in 1982 (Anderlecht). In 1968, it was considered the best European Team by France Football. Many of its successes in the 1960s were with all-time football great Eusébio in the side.

During the 1970s, the team faded slightly from the European scene, but remained the main force inside the Portuguese football scene. However, financial problems began undermining the club. In the 1980s the board decided to close the third level in the Estádio da Luz, and a questionable signing policy (which included squads composed of well over 30 players, signing players for hefty sums without any sporting or financial return, and signing fading Portuguese star Futre in the early 1990s), resulted in several problems in the years ahead. Consequently, the lowest point in recent Benfica's history was the heavy 7-0 loss against Celta Vigo for the UEFA Cup, followed by a sixth place and a fourth place that ruled them out of European competitions for the first time in history.

Recently, the club is attempting to recover from its financial and sporting failures.

Benfica play their home games in the new Estádio do Sport Lisboa e Benfica (unofficially "Estádio da Luz", literally the stadium of light) - which is partly built on top of the old stadium grounds -, one of Europe's largest sporting stadiums and host of the Euro 2004 final. They are Portugal's most decorated football team, having won 30 domestic league titles, 24 Portuguese Cups, and two European Cups.

The Estádio da Luz , officially named the Estádio do Sport Lisboa e Benfica which translated means, "Stadium of Light", is a football stadium in Lisbon, Portugal, the home of SL Benfica. It is also called A Catedral ("The Cathedral") by Benfica's supporters due to historical reasons.

The term "Luz" refers, historically, to the parish of the Igreja de Nossa Senhora da Luz (the Church of Our Lady of the Light). The Stadium of Light in Sunderland, England may well have been inspired by the name of this Lisbon stadium.

Some people mistakenly believe the stadium is mistranslated as "The Stadium of Light", however, they are incorrect.

In Spanish and Portuguese, the word "Luz" means "Light". Although the stadium was named in honor of the parish, the words "da Luz" in the parish name translates to "of the Light". Hence, the name is not mistranslated and is correctly translated. It is incorrect grammatically, to refer to this naming as a "misnomer".

It hosted several matches in the 2004 European Football Championship, including the final. The previous Benfica stadium (also called "Estádio da Luz" and one of the largest stadiums in the world with 120,000 seats) was demolished and the new one was built for the tournament with a capacity of 65,400. 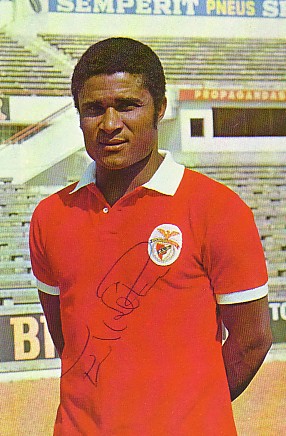 Eusébio da Silva Ferreira, (born January 25, 1942 in Mozambique - then an Overseas Province of Portugal), popularly known simply as Eusébio, is a Portuguese former football forward of Mozambican origin. He helped the Portugal national team reach third place at the 1966 World Cup, being the top goalscorer of the tournament, and was elected the European Footballer of the Year in 1965. He played at the club Benfica for 15 years, and is the team's all-time top scorer.

Nicknamed "The Black Panther", or "The Black Pearl", Eusébio scored 727 goals in 715 games. He is also known for his speed and his powerful, accurate right-footed strike. He is considered Benfica's and Portugal's most renowned player and the first world-class African striker. He was elected the 9th best footballer of the 20th century in a poll by the IFFHS. Pelé named Eusébio as one of the 125 best living footballers in his 2004 FIFA 100 list. In November 2003, to celebrate UEFA's Jubilee, he was selected as the Golden Player of Portugal by the Portuguese Football Federation as their most outstanding player of the past 50 years. 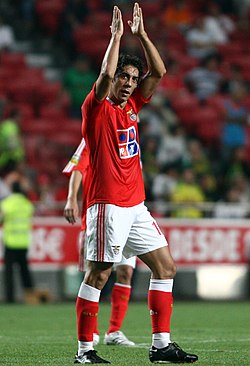 Rui Manuel César Costa, usually referred to simply as Rui Costa (born March 29, 1972 in Lisbon) is a former Portuguese football player and current Director of Football of SL Benfica. An attacking midfielder also capable of playing as a deep-seated defensive midfielder, he most recently played for Portuguese club SL Benfica. He is considered to be among the best Portuguese playmakers of all time and is commonly known as the maestro, or "The number 10", as reference to his skills as an offensive centre midfielder. In 2004, he was named by Pelé to the FIFA 100, a list of the 125 greatest living football players.

At the age of 5, Costa joined the infant indoor soccer team of Damaia Ginásio Clube. Roughly four years later, at the age of 10, Rui tried his luck at SL Benfica. Within 10 minutes of training, Portugal legend Eusébio, who was supervising the youngsters, was impressed at Rui's skills. Up until 1990 Rui played for Benfica's youth squads. That season he was loaned to AD Fafe on a season long deal.

In 1991, after the Under-21 World Cup (which Portugal won after a victorious penalty kick scored by Rui Costa), Rui returned to Benfica. There, he won the Cup of Portugal (in 1993) and the Portuguese First Division Title (in 1993/94). This would be Benfica's last league title for eleven years. At the end of his third season in Benfica's senior squad, Fiorentina offered 6 million euros for the young midfielder, an impressive fee at the time. Since Benfica was struggling with financial problems, Rui Costa had to leave.

Rui played for 7 seasons at Fiorentina, where he won two Italian Cups (in 1995/96 and 2000/2001). Despite the heavy competition (namely Zidane), Rui Costa was named the best number 10 player in the Serie A a few times. His departure of Fiorentina was discussed every season, since many clubs constantly showed interest in signing him. However, he only left when Fiorentina went bankrupt after the 2001/2002 season.

Fatih Terim was the coach of Fiorentina in the 2000/2001 season when he was leaving Fiorentina for AC Milan he took Rui Costa with him who paid the amount of 35 million euros for the player. In doing so, Rui Costa became Milan's most expensive transfer of all-time. Rui played for five seasons in Milan, where he won one Serie A title, one Italian Cup, one Italian Super Cup, one UEFA Champions League and one European Super Cup.

Rui Costa was an high-profile figure for his first two seasons at A.C Milan (In which Milan won the Champions League, European Super Cup, and Italian Cup), but went to be a mere fringe player with the emergence of the Brazilian wonder-kid Kaká. Though pleased with Kaká's success, Rui Costa was disappointed to be restricted to the bench in the twilight of his career.

On May 25, 2006, Rui Costa's return to SL Benfica to play for the forthcoming season was announced in a press conference. He had been released from AC Milan after both the player and the club reached an agreement to end his contract. Rui Costa also gave up his 4.6 million euro contract/year to play in the club that, year after year, had dreamt of his return.Rui's affection for Benfica is publicly known and so is his desire to end his career at the Portuguese club. On 11th May 2008 Costa played his last game for Benfica, before announcing his retirement from football.
_________________
Forca Portugal!