The time for summer transfers is upon us again. This thread will serve as the area for United fans to discuss any possible transfers, or any done transfers!

Barcelona have agreed a £6million deal with Manchester United for Gerard Pique.

Sportsmail revealed last week that the 21-year-old defender was in negotiations over a return to his former club and the sides came to an agreement over the weekend.

Barcelona will pay £4m now and the rest depending on Pique's appearances.

So this means we have let Pique go to Barcelona. I personally think it's a smart move on Barcelona's part. They know we won't NEED him necessarily, and since their defense has been sub-par, he will get a good chance to do something in the future. The Catalan boy's going home.

All transfers will be discussed here.

Well annoyed, wax hoping he would stay put and maybe get a few more chances next season. It's not a very good idea selling him though, sure we got Vida and Rio but when they get injured or lose form then we are gnna be in trouble to find a replacement.
_________________
Forca Portugal!

how can man u sell pique and keep brown, surely the other way round wuda made more sense, i didnt see much of pique but he looked a class defender who wud have easily deputised for rio or vidic, defensive cover is the only man u really lack depth i think, SAF aint stupid tho, he must have somethin up his sleeve

I know what u mean. Pique is a talenter player with a huge future and selling him wouldn't be a good idea. I wouldn't want us to sell Brown either, he has been consistent throughout the season and has done a good job filling in for Neville.
_________________
Forca Portugal!

I kind of felt that Pique should have gone. He's got too much talent to just wait for a chance, Barcelona will be a better place for him as he'll get more chances over there (considering their defense is nothing compared to ours). He was bound to go home, I always thought. He hasn't really been that impressive from what we've seen but he's actually pretty young (same age as Cesc, I think) so he'll have time to progress over there.

I personally can't wait to see more United youngsters make it through. Maybe give them a shot. But considering our place in Europe at the moment, we'd be best off to get a good RB, and some replacements for the CBs.

Manchester United defender Gerard Pique claims a deal to take him back to former club Barcelona is at "an advanced stage".

However, after failing to make his breakthrough in England the Catalan youngster is looking for a return to his former club.

"Negotiations with Barca are at a very advanced stage," he told Barcelona's website.

"I like the idea of being able to play in a Barcelona shirt again.

"At the moment there's nothing official. Now we just have to wait for more details.

"At the moment the decision has to be made by other people."

Pique, who is back in Barcelona to prepare for a friendly game between Catalunya and Argentina on Saturday, also spoke highly of new Barca coach Pep Guardiola.

"He was a great player and he has the character you need to coach a side like Barca," he said.

"A new project is starting with Guardiola and there is a lot of new hope."

I can't believe there's even a national team for Catalunya on it's own. I'm 1/4 Catalan but I doubt I'd only play for them if I grew up over there. It's too much of a division, and the politics in Spain are ridiculous right now. 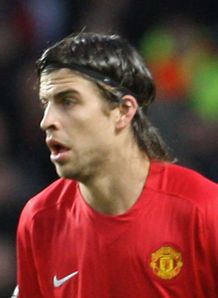 Gerard Pique is set to return to Barcelona after the Spanish side reached an agreement with Manchester United.

The defender opted to leave Camp Noua four years ago because he felt that he would have a better chance of breaking through at Old Trafford.

However, he failed to establish himself as a regular in Sir Alex Ferguson's side and his opportunities continued to be limited this season due to the reliable central defensive partnership of Rio Ferdinand and Nemanja Vidic.

Pique rarely featured in the run-in as United sealed a European and domestic double, and was left out of the squad for the UEFA Champions League final.

He has now decided it is time to move on and has agreed a four-year contract with Barcelona.

The 21-year-old Spaniard, who scored two goals in the Champions League for United, is now expected to finalise his transfer over the next few days.

Well annoying. He has a lot of potential and now he's going off be Barca.

Im gutted Pique has left he was a player with so much promise. Maybe this will mean Evans has a chance of staying.

Supposedly we've been linked with Dani Alves, Luis Fabiano, and Micah Richards today. Who would you have out of the 3.

Dani Alves- He'd have to be my first choice, the guy is just an amazing talent and he would complete the right flank.

Micah Richards- Top class player, but if we are gunna sign Dani Alves then whats the point of bringing in Micah? He wouldn't get much time playing at centre back with the formidable partnership in Vida and Rio. I'd only go for him if Dani Alves is out of reach.

Luis Fabiano- Still unsure on him. Is he a one season wonder? I think bringing in some one with a better track record. I would love to bring in Villa as he could be an option. Benzema would be my preferred option but there is very little chance that will go through as he wants to stay at Lyon for another season.

why would man city sell micah richards to united? and considering he's come up through the city ranks, would richards even want to join united?

I really don't like Alves much either, he's a good player but he's a bit of a dick, every summer he's talking about how he wants to leave sevilla lol.. i'd say Boswinga is better than him.

Benzema would obv be my first choice...Have to love the guy ay!

Realistically I wouldn't mind Dani Alves though. He's good at defending and amazing going forward. We need a good RB to complete this team. He would be the missing piece of the puzzle in my opinion.
_________________
Forca Portugal!

what about Cicinho? two years older than alves but he'd be a lot cheaper.

Duzza wrote:why would man city sell micah richards to united? and considering he's come up through the city ranks, would richards even want to join united?

I really don't like Alves much either, he's a good player but he's a bit of a dick, every summer he's talking about how he wants to leave sevilla lol.. i'd say Boswinga is better than him.

From what i've been told there is a deal going down and it's all hush hush, but take that as what you like.

Duzza wrote:what about Cicinho? two years older than alves but he'd be a lot cheaper.

cicinho doesn't like defending, unlike alves who can do both. I believe alves has many similarities to Evra, loves to get forward, has unbelievable stamina and reads the game very well in defence. Can also put a mean free kick in the box as well as strike from distance. As with the other two that have been mentioned, luis fabiano i agree would be unsure on taking the risk and with Micah Richards i believe we have another badly dubbed England superstar. Don't get me wrong hes done a pretty good job for Man City but he seems more of an athlete rather than a footballer and can be prone to making mistakes. When these are made for England, many will soon pick up on the idea that he may not be worth the 20-30m bieng bantered about, but a much more subdued and realistic figure of around 8-10m.

Alves & Benzema are the ones I want, not like we'll ever get Benzema though. And I'd prefer we stayed away rather than upset them the way RM is doing with us. If he doesn't want to come, simple as.

Manchester United last night came under fire after signing one of Italy's most promising young strikers.

Just days after they were pipped by Arsenal to the signature of 17-year-old Cardiff midfielder Aaron Ramsey, United snapped up Davide Petrucci, 16, who scored 14 goals in 19 matches last season and was the top scorer in Roma's youth team. He has also starred for Italy's under-17 team.

United will pay Petrucci £95,000 a year and will cover the cost of regular flights home to Italy. The deal is the maximum permissible offer for a youth-team player. Roma will receive around £200,000 in compensation but the move has caused fury.

"It is a nightmare," said Il Romanista, a newspaper dedicated to Roma. "Manchester United have dealt us another low blow, stealing Petrucci from under our noses, probably the best product of our youth system. In three to four years, he will be worth 100 times as much."

Petrucci, who comes from the San Basilio suburb of Rome, has been compared to a young Francesco Totti and could have made the first-team squad next year. However, Roma offered him a contract worth only £16,000 a year, the basic youth-team deal. Petrucci was also said to be concerned that he had not already been called up to the first team. Totti made his debut in 1993 when he was 16.

Bruno Conti, Roma's technical director, said the club were unwilling to improve the terms because it would upset other youth-team players who had already signed similar deals, including Riccardo Brosco, a defender who has already been promoted to the full squad.

Conti said Petrucci would have been given opportunities to show his value next season.

Roma have a history of developing youth players. Daniele De Rossi and Alberto Aquilani have come through the system in the past two years and are now playing for Italy.

Roma are unable to contest the signing, since Italian rules state it is impossible to offer a professional contract to anyone under 17. Petrucci's birthday is in October.